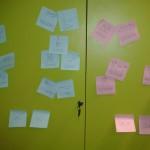 So we’re off on our language adventure! Are you ready? Have you got your shelf or box with all of your resources?

Every morning I have looked at my different coloured post-its with growing excitement and today I am actually going to make a start! I’ve also told a few people about my project and frankly I think that they’re so relieved that my New Year’s resolution isn’t to go on a diet (again) that they’re almost as excited as I am!

I really need to know where I am at the start to see how much I have to learn, so I’ve given myself 20 minutes to write down all of the Spanish words that I could think of. Some of these are words that I have picked up on holiday, some I’ve learned on a Beginners course that I took years ago and others came from songs that I’ve heard – but don’t necessarily figure on my Ipod – such as Vamos a la playa! (bet you know it too…). It took me about 20 minutes to get them down on paper and the list is disappointingly short – but at least I know what I know now.

The first thing that struck me was that although I had come up with about 20 nouns, I had no idea whether they were masculine or feminine! In Spanish, as in French and many other languages, all nouns are either feminine or masculine and you have to learn the gender when you learn the word.
If I’m honest, I couldn’t even remember the different words for ‘a’ (un/una) or the (el/la). I looked each word up and wrote my masculine words on one colour post=it and feminine words on another and stuck them on different sides of my cupboard doors. As I was sticking them up, I also started to group them together – all the transport words in one section, all the breakfast words in another.

I then tested myself immediately and got out of 16 out of 20 genders correct! I remembered the gender by picturing where they were on the cupboard – particularly if they were part of a group like the breakfast stuff.

Challenge: Whatever your level, write down the first twenty nouns (naming words like cat, beach etc) that come to mind in the language that you want to learn, check the spelling in your dictionary or on http://www.wordreference.com. Remember to put the gender if appropriate and stick them in a place where you will see them every day. You might also want to add to them. I’m curious to know what a spoon is to complete my cutlery group ….