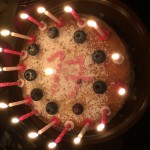 La cuisinière est enfin arrivée!’ (The cooker has finally arrived!), but ‘les livreurs’ (the delivery-men) were unable to connect it to the gas supply as it was not ‘conforme’ (up to current standards).  As it is a ‘cusinière mixte’ with one electric and 3 gas rings, I now have a rather expensive second ‘plaque’ on which to cook my pasta and sauce – but a fully working ‘four’ (oven)!

Tried to buy the ingredients for a strawberry sponge cake for a birthday, but were stumped on what double-cream was called in French (crème fraîche épaisse).  Asked a sweet little old lady who admonished that it was ‘bon pour prendre les kilos’ (good for getting fat) but failed to find it in the dairy ‘rayon’ (aisle).  So we bought a ‘moelleux au chocolat’ (runny in the middle chocolate cake) instead.

Despite visiting the gardens of the Château de Versailles often, I have never braved the tourists who gather ‘en colimaçon’ (in a spiral) in front of the gates.   But I recently bought ‘un abonnement annuel’ (a yearly pass) that provides unlimited access for you and ‘un invité’ (a guest).  I waved ‘ladite’ (said) magic card in front of the security guard and he escorted me and my guests past four hours of ‘touristes deconcertées’(bewildered) straight to the front.  ‘On en a pour son argent’! (Worth every penny!).

Once inside the Château, there are no more queue privileges and the one for the toilets was almost as long as the one we’d just jumped.  Forget the ‘Galerie des Glaces’ (Hall of Mirrors) – we headed straight for the ladies’, then managed a whistle-stop tour‘une visite éclair’ of the royal chambers before  joining the lunch queue.  We were in such a hurry that we missed Marie-Antoinette’s bedroom ’carrément’ (altogether)!  As the visit is strictly ‘en sens unique’ (one-way) we had to get ‘talkie-walkie’ (walkie-talkie!!!!!) permission to squeeze back ‘rouge de honte’ (red-faced) past the same ‘foule’ (crowd) that we’d just jumped.

Talking about cake and Versailles in the same post, I simply have to bring up the ‘Qu’ils mangent de la brioche!’ (Let them eat cake!) quote.  But did she actually say it or was it all ‘mensonges’(lies)?

Find out by visiting www.history.com.