‘J’ai l’habitude de’ (I’m used to) travelling between England and France ‘sans préavis’ (at short notice) sometimes ‘sur un coup de tête’(on a whim).  Having had ‘quelques ennuis’ (some trouble) with train travel recently and needing to be in France ‘le lendemain’ (the following day) I decided to take the plane. I found ‘un billet d’avion pas cher’ (a cheap plane ticket) which with Avios points ‘ne coûtait que’ (only cost) £50.‘Youpi!’ (Yay!) 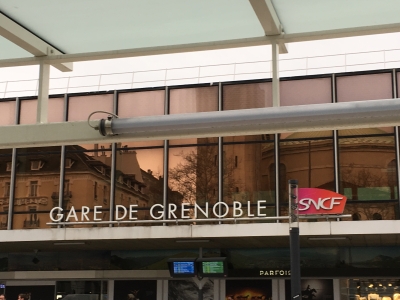 It meant travelling from Birmingham ‘un dimanche matin’  (on a Sunday morning) sans ‘bagage en soute’ (without any hold luggage) which seemed fair enough for a ‘un séjour de courte durée’ (a short trip) so ‘j’ai réservé en ligne’ (I booked online). ‘Rien de plus simple’ (It couldn’t have been more straight-forward).

The first ‘pépin’ (hiccup) was when I discovered that my two computers, phones, ‘agenda’ (diary), purse, passport, keys, small carry-on suitcase and ‘trousse de maquillage’ (make-up bag) ‘pesaient plus que’ (weighed more than) the 10kg ‘bagage à main’ (hand luggage) allowance – so I had to book another suitcase on for a further £56.

Then I discovered that ‘il n’y avait pas de train’ (there were no trains) to Birmingham on a Sunday morning ‘qui me ferait arriver pour 10h’ (that would get me there for 10am), so another £50 went on a taxi. Still, I got to the airport ‘avec du temps à perdre’ (in plenty of time) … only to find out that the plane ‘avait une heure et demie de retard’ (was delayed by an hour and a half) so ‘j’aurais pu prendre le train après tout’ (I could have gotten a train after all).

‘C’est la vie!’ (Hey ho !) I spent my time ‘à faire du lèche-vitrine’ (window-shopping) ‘comme je n’avais plus de sous’ (as I had no money left) and I rebooked my coach at the other end for 40 minutes after our delayed plane ‘était censé arriver’ (was due to arrive).

‘Nous avons atterri’ (we touched down) 20 minutes after our predicted later arrival time. Then we took ‘une navette’ (a shuttle bus). Then there was ‘la douane’ (passport control). Then I had to wait for my suitcase at the ‘retrait des bagages’ (baggage reclaim). Despite running up and down escalators with 27.3 kg of luggage, I was just in time to see my coach for Grenoble ‘quitter le parking’ (leaving the car park). If I waited for the next coach I would probably miss ‘le tout dernier’ (the very last) train to Gap – over 200 miles away.

So I booked ‘un nouveau billet’ (a new ticket) ‘avec une autre compagnie de bus’ (with a different coach company) that was leaving 15 minutes earlier. ‘Ça m’a coûté £15 de plus’ (It cost me another £15) but it would give me ‘une vraie chance’ (a fighting chance). I was just about to relax, when the driver came on the ‘haut-parleur’ (speaker) to say that he was going to leave 5 minutes later to wait for some passengers who had had their flight delayed. I’m afraid I piped up in a rather matronly fashion ‘5 minutes Monsieur, mais pas 10, parce que sinon je risque de rater mon train’ (5 minutes Sir, but not 10, or else I might miss my train). The other passengers on the coach gave this ‘britannique égoïste’(selfish Brit) ‘des regards glaciaux’(some icy looks) but ‘j’étais à bout de nerf’ (I was at the end of my tether) at this point.

About 20 minutes into the journey the driver stopped at a service station and came on the speaker again. ‘Est-ce que la dame qui a peur de rater son train veut bien descendre et me suivre’ (Would the lady who is scared of missing her train please get out of the coach and follow me) I prepared myself mentally for being abandoned at the side of the motorway. ‘Loin de là’ (Nothing could have been further from the truth). The driver had asked me and two other passengers to join him so that he could buy us all a sandwich. He told me that I wouldn’t have time to buy anything at the station and he didn’t want me to go hungry until I arrived home ‘autour de minuit’(around midnight).‘J’ai failli l’embrasser!’ (I almost kissed the man!).

I got to Grenoble, bought my ticket and got the lift down to the subway and up to the platform with 3 minutes to spare when I realized that I had missed the ‘bornes de compostage’ (the yellow posts where you need to get your tickets stamped) and there were none on the platform, so I left my suitcases with ‘un parfait inconnu’ (a complete stranger), ran down the stairs, stamped my ticket and finally slumped in to the seat from which I’m writing this. I wonder if I’m getting too old for this lark. The words of a rather frustrated ski-drag attendant who had passed me half-a-dozen ‘perches’ (buttons) ‘me viennent à l’esprit’ (come to mind). ‘Madame – SI vous arrivez là-haut – RENTREZ chez vous!”

‘J’aurais dû l’écouter’ (I should have listened to him).